Doubling is a relatively simple yet effective trick for creating depth, richness and interest in an arrangement and a mix. Joe Albano shares his top tips for doubling up.
Doubling is one of the most common techniques used in mixing, creating a duplicate performance for everything from adding subtle depth to a vocal to creating enhanced width for instruments. Let’s take at look at some of the basic applications and techniques for this classic effect.

When a particular musical part—instrumental or vocal—could benefit from a little extra fullness or richness, it’s common to have the same part performed by more than one player or singer. Thanks to the natural small variations in pitch and timing, hearing two versions of the same part together creates a pleasantly enhanced sound. This is the result of a subtle, shifting comb-filtering effect—the harmonics and overtones of the two similar signals are offset in pitch and time, causing cancellations and reinforcements, which can provide an enhanced tonality. This effect can range from what sounds like a single part with a very subtle extra richness to what clearly sounds like two different performances of the same musical part. With more than two versions of a part, the effect is even more dramatic—think of the classic sound of a vocal chorus or the richness of a massed string section—but even a single instance of doubling can be beneficial.

This technique has been used forever in musical arrangements, and its use in modern mixes is equally widespread. Of course, doubling doesn’t really require any technical processing—the most basic way to double a part is to simply record two performances of it. Thanks to standard multitrack recording and overdubbing, the same performer can easily create both parts—no matter how consistent a musician or singer is, there’ll always be enough subtle time and pitch variations to create the desired effect when the parts are layered.

In fact, given the common practice of recording multiple takes, it’s often not necessary to dedicate extra time to recording doublings—once the main take is chosen or comped together, the additional takes can be utilized to create a doubling effect. Even if there’s only one take available—an unusual but not unheard-of scenario—repetitive musical sections like choruses could still be naturally doubled by combining the performance in one chorus with the identical section in one of the other choruses.

Real musical doublings can often be highly desirable, especially with vocals—the typical performance variations can often lend a nice, loose, natural vibe to the part. But sometimes a tighter doubling effect might be preferred, or there may not be suitable extra audio to create the desired effect. That’s when engineers turn to artificial doubling, or ADT.

ADT—Artificial Double Tracking—is the term commonly used to refer to the creation of a doubling effect by technical means. Specifically, this means by duplicating a part and delaying it by a very small amount—just enough to create a desirable thickening or the illusion of two separate performances. A slight delay of around 10 to 20 milliseconds or so—typical of the kind of timing variation that might occur when human performers double a part—is enough of an offset to create the requisite comb-filtering effect and the resulting enhancement when the original and delayed signals are combined. 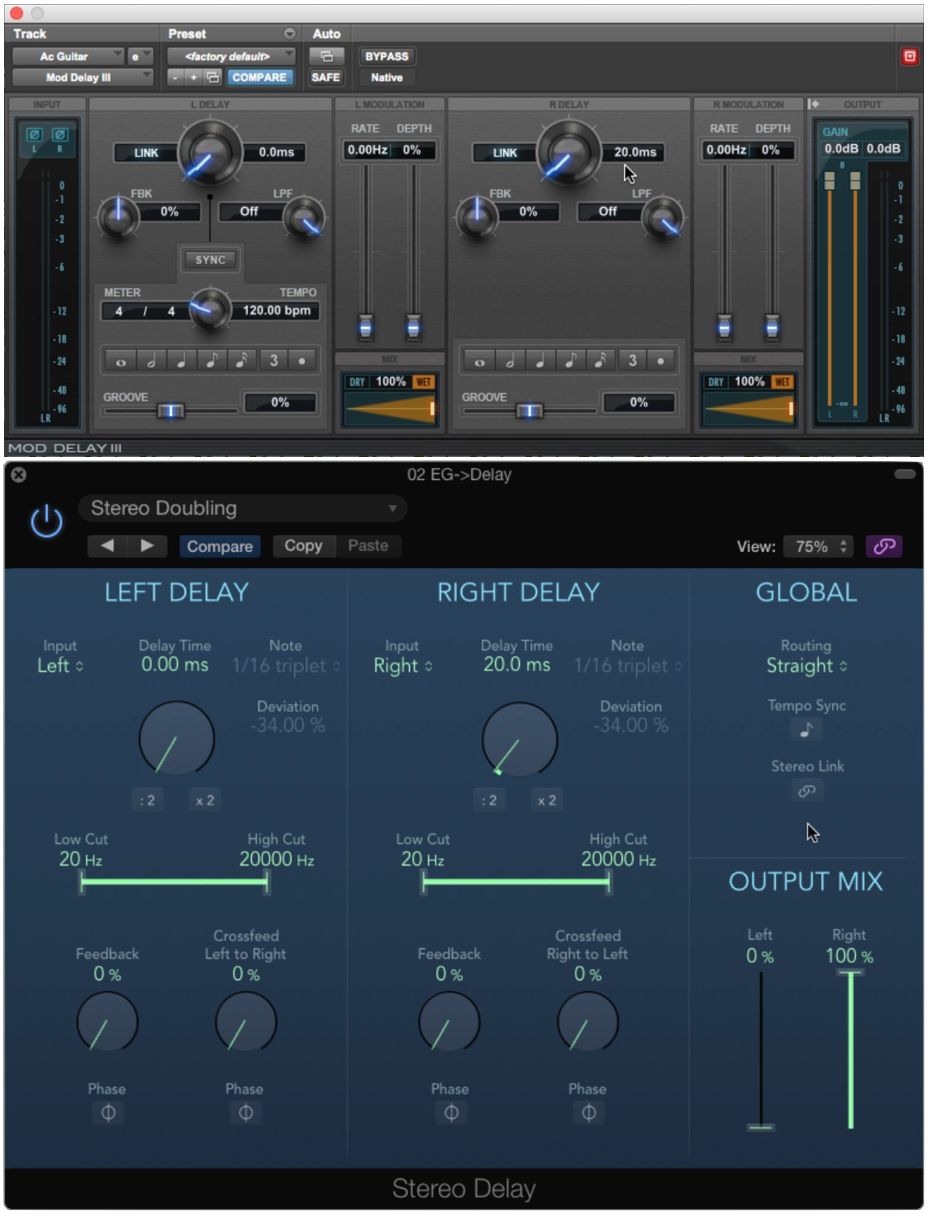 Any delay effect/plug-in can create ADT, as long as the delay time can be set in a suitably low range with whatever delay time control is provided. The delayed version is then mixed with the original signal for the desired strength of the doubling, up to around a 50% mix for the strongest effect.

In the early days of the analog era, tape delay provided the doubled version of the part—longer delays were used for classic effects like slap echo, but very short delays made for effective doubling. Possibly the most famous use of this particular technique was the method utilized at Abbey Road Studios, for most of the classic Beatles recordings. Their version of ADT incorporated a Varispeed control, which the engineer could manipulate in realtime to alter the playback speed of the second tape machine—the one being used to generate the delayed, doubled part. 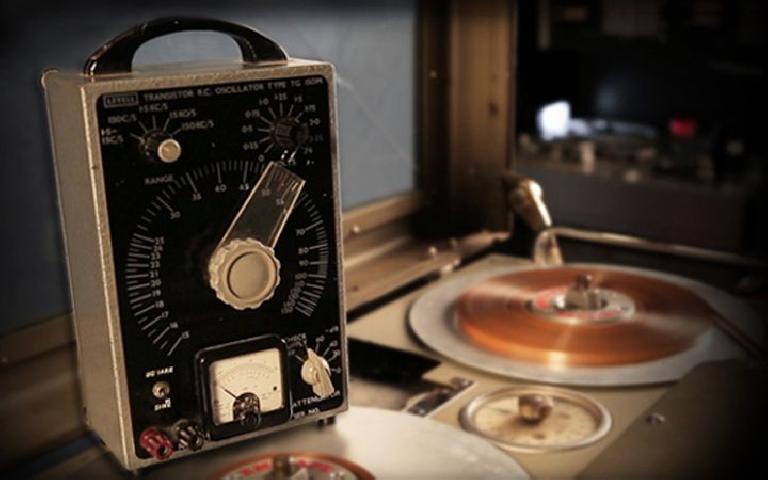 Very slight variations is speed produced additional variations in timing and pitch, and since these variations were ”performed” by the engineer, the technique produced very human-sounding variations in the delayed signal, resulting in a very natural, very distinctive ADT effect—one which may mixers have sought to emulate over the years for vocal parts.

Of course, most delay plug-ins include an option for modulating the delay time, and this can be used to emulate the extra richness of the Abbey Road ADT. An LFO with a Random waveform option would provide the most natural, humanized variations—regular periodic LFO shapes (like Sine or Triangle wave) can also add something, but the result will sound more like a typical chorus effect than the more human doubling character from random LFO modulation. Waves’ Reel ADT plug-in—part of their Abbey Road Collection—emulates the original hardware technique, including both a random LFO option and a manual varispeed knob that the engineer can operate by hand for the most “human” effect. 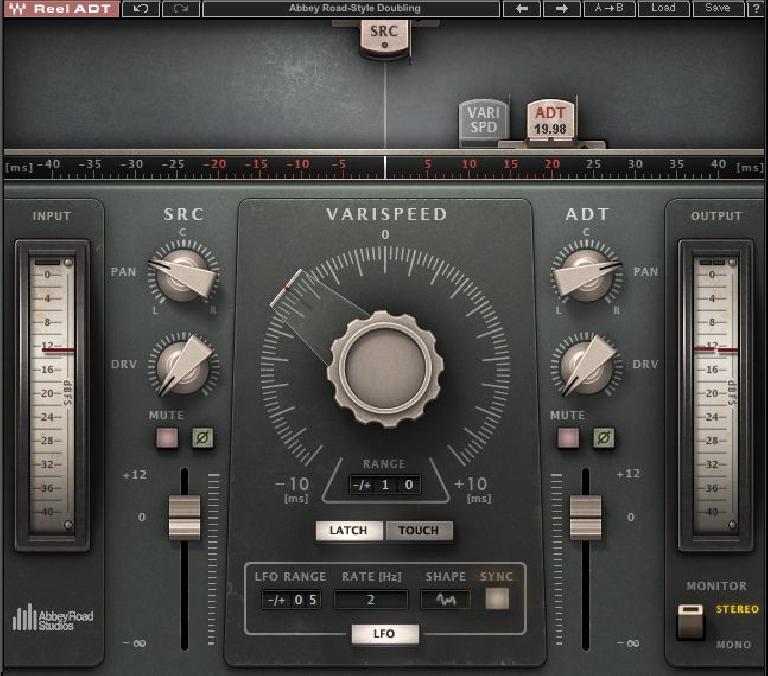 Besides adding a little richness and depth to a vocal or instrument part, doubling is also commonly used for widening a signal. There are a number of variations of this effect—some are created only with delay and panning, while others also incorporate micro-pitch shifts to create and enhance the widening effect.

A very common use of doubling to create a wider image is to delay a copy of the original signal as usual, and then pan the original and the delayed copy to opposite sides of the stereo soundfield. This could be done manually, if necessary, by duplicating the track, delaying the second channel strip and panning them opposite. However, most delay/doubling plug-ins can do it within the plug-in, even with a mono source track. Most DAWs offer the option for a mono->stereo plug-in, which would be instantiated on a mono track, where it would internally duplicate the signal for Left & Right, and allow different delay times to be set for each side.

A mono->stereo delay plug-in set up for wide doubling

The most basic version of widening would be to set the delay of one side to zero—or the mix control to dry-signal-only on that side—and then dial up the appropriate delay, usually around 15 to 20 milliseconds, on the other side. This would create a hard-panned stereo effect that—with those delay times—would create the sound of two performances, one on the left and the other on the right. This is commonly done with rhythm instruments—like for example a strumming acoustic guitar part—and is so common that it’s typical to have several tracks doubled in this way in an arrangement.

A typical implementation of wide-panned doubling for a rhythm part

The wide doubling doesn’t have to be hard-left & hard-right; the DAW’s pan controls can be used to narrow the image slightly, and when the effect is used on multiple parts in a mix, it’s not uncommon to have them “nested”—some hard-panned, others slightly less wide-panned—all together they can be placed to fill up the soundfield around the centered parts, with the nested doubled pannings contributing to greater clarity in the mix than if they were all hard-panned. 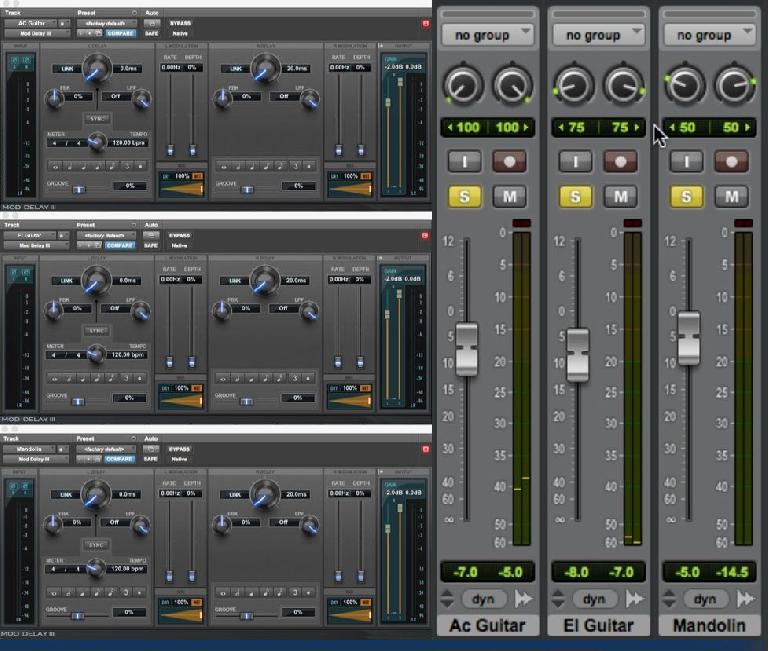 A variation of this effect would keep the original signal in the center, with wide-panned doubles on both left & right. If a plug-in has two independent delay settings and dry/wet mix controls, then the dry/wet mix for both left & right can be set to around 50% more or less, preserving the original signal in the center, and slightly different delay times set for left & right—say, 15 and 20 milliseconds—for the wide-panned doubling effect.

A variation on the delayed/panned widening effect involves the use of micro-pitch-shifts instead of or in conjunction with short delays to create the doubling/widening effect. Micro usually means up to around 10 cents or so—enough to slightly offset the waveforms when the original and pitch-shifted versions are combined, for the desired effect, but not enough to sour the overall pitch of the part. An original mono signal would be split into stereo: typically one side would be shifted up around 10 cents, and the other down by the same amount.

Used on their own (without delay), micro-pitch-shifts can create a more subtle widening, that doesn’t sound like two or more performances, but instead creates a wider signal, filling up space in the stereo soundfield. This might be used with a vocal, as above, with or without a centered dry signal. With just the left & right pitch-shifted signals, the widened signal would be good for backing vocals; with a centered dry signal (≤50% mix for L&R) the effect would create a nice wide lead vocal effect.

Short delays can also be added to the micro-pitch-shifted signals, to enhance the stereo separation and doubling effect.

This kind of pitch-shifted widening can be pieced together with multiple plug-ins, but there are also plenty of dedicated Widening effects that include all the necessary controls. Pro Tools includes one in its basic plug-in set, and third-party effects like Soundtoys’ Microshift make it easy—the Microshift plug-in even includes emulations of the distinctive character of several classic digital hardware pitch-shifters. 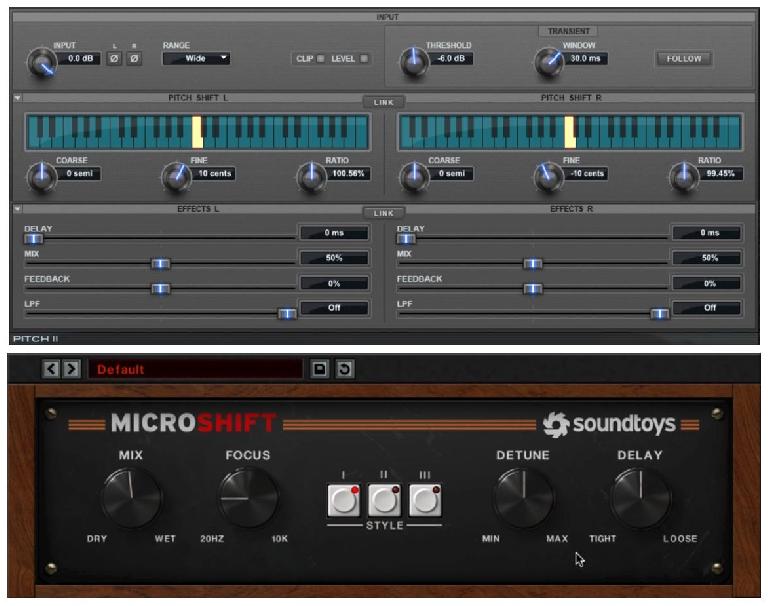 Most of this discussion has focused on creating doublings of the same part, but another approach to doubling is classic orchestral doubling, where a particular musical part is played in unison not only by two or more of the same instrument, for extra richness, but by two or more different instruments. Having, say, flutes and clarinets both play the same part, or in a modern pop arrangement, maybe a guitar and keyboard double the same riff, can create not just additional tonal richness for the basic sound of the instrument, but a distinctly new and different sound.

In the old days, before synths and samplers were around to provide just about any sound, orchestral arrangers would double musical lines with different instruments for new and interesting tones, thanks to the blending of the different harmonic and overtone structures of the instruments doubled this way. Naturally, this is still a common approach to doubling—even if a part to be doubled is an audio recording, audio-to-MIDI conversion can often be used to create a MIDI version which can then be used to trigger a sampled or synthesized instrument, for some interesting and creative musical doublings to enhance the arrangement.

Doubling is one of the most common mixing techniques, and with the different variations available many mixes utilize it on a wide range of tracks—if used appropriately it can greatly enhance both the tonality of individual parts and the overall stereo sound field of the mix, and it should be a standard part of every mixer’s toolbox.